Saturday Along the Shore 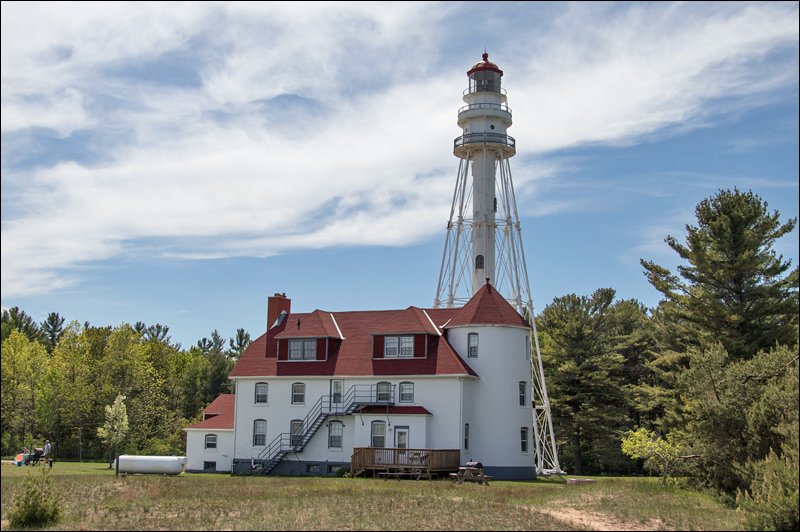 Yesterday on facebook, I read that the U.S. Coast Guard had removed the fifth-order glass Fresnel lenses from two Wisconsin lighthouses on the western shore of Lake Michigan. Those lenses had been there since the 1800s, but today’s technology has doomed the classic lenses used in lighthouses for over a hundred years. Modern LED beacons have replaced Fresnel lenses worldwide.

The facebook post also said that the lens from the Kewaunee, WI lighthouse was placed on display at the Kewaunee County History Center. Furthermore, a retired Coast Guard officer was going to do a presentation on Fresnel lenses and their uses as lighthouse beacons. This news was all it took to make me decide a road trip to Kewaunee was in order.

After a cold, wet, and dreary May, so far June has provided a stretch of sunny days with pleasant temperatures. Today was no different. Under a clear blue sky, I packed up my camera gear and headed out. Kewaunee was my first destination. I got what I wanted, a photo of the Fresnel lens now on display there. The lens had arrived only yesterday.

While in Kewaunee, of course I wanted to get a photograph of the lighthouse. Recent work provided a nice approach to the viewing area, and a historic anchor was added as well.

Instead of staying in Kewaunee to listen to the lighthouse presentation, I decided to drive another ten miles north to Algoma. The Fresnel lens had also been removed from the Algoma pierhead light, but that lens will be sent to Milwaukee and placed on display at the North Point Lighthouse museum. Below are today’s pictures of the Algoma Pierhead Light. It’s been at least thirty years since I last photographed this lighthouse.

My return trip took me back through Kewaunee. I stopped there to photograph the tug Ludington, which is moored there. The Ludington is one of only five ships still afloat that participated in the D-Day invasion of France in World War II. In the war, this tug pulled barges of ammunition across the English Channel to Normandy.

Leaving Kewaunee, I headed south to Point Beach State Forest, a favorite destination because it’s home to one of the tallest lighthouses in Wisconsin, Rawley’s Point Lighthouse. Point Beach is also home to a popular campground, which appeared to be almost full of campers enjoying a nice early summer weekend.

The white metal tower shown here is actually the second light tower at Rawley’s Point. The original tower deteriorated to the point that it could no longer be used. It was cut off, and capped with the pointed roof you see in the picture above. The steel tower was moved to Wisconsin from Chicago in 1894. This lighthouse had been built as an exhibit for the 1893 Columbian Exhibition in Chicago. At 113′ in height, this is one of the tallest lighthouses in Wisconsin.

While at Rawley’s Point, I took a walk down a side trail and was surprised to find many clusters of one of my favorite wildflowers, columbines, in bloom. Even though I was not equipped for macro photography today, I managed to get a picture of a pair of columbines with my DSLR and zoom lens.

Leaving Point Beach State Forest, my next stop on the way home was Two Rivers, home to the Rogers Street Fishing Museum. The North Pier Lighthouse was relocated to the grounds of this museum and greets all who drive past it.

Continuing south, my final stop was Manitowoc, a historic Great Lakes port known for shipbuilding and industrial commerce. Manitowoc is also the western terminus of the S.S. Badger, the last steam-powered car ferry on the Great Lakes. The Manitowoc Breakwater Lighthouse marks the entrance to the harbor and is adjacent to a large marina.

I got another surprise in Manitowoc. I’ve been here often, but never noticed several murals painted on the side of one of the downtown buildings. Naturally, they had to be photographed. The submarine mural pays tribute to the 28 submarines that were built in Manitowoc for the U.S. Navy during World War II.